It all started with a single student...

Anish Merchant (seated) born and raised in Texas was living in Buenos Aires, playing music in a bluegrass band, and basking in the city’s world renowned nightlife.

With a degree in physics and a high GMAT score, Anish offered to tutor “a friend of a friend” who was struggling with the exam. What began as informal hourly courses would change the course of both of their lives.

During their sessions, Anish learned his student’s motivations for taking the GMAT. She was a very high performer in a multinational corporation who was consistently getting passed over for promotions due to her gender. Frustrated by the machismo she was facing in the workplace, she wanted to look for more opportunities abroad. But she wasn’t getting the GMAT scores she needed, even after a few sessions with Anish.

Empathetic to her plight, Anish set about refining his lesson plans. He knew this student had what it took to ace the GMAT. She was intelligent and hungry for a more fulfilling career; she just needed a better approach to the exam. Finally, after a year of picking the exam apart and putting it back together, Anish developed the Merchant methodology. With it, this first student was able to score a 700 and follow her dreams abroad. She recommended him to some friends.

Word in Buenos Aires quickly got out that Anish was the GMAT wizard. People who studied with him got results. Before long, many of the top young professionals in the nation were seeking his services. He was overwhelmed with requests. He needed help, and he found it, in all places, from his bluegrass bandmate Joe Mashek (standing).

Over the years, Anish and Joe have been able to help hundreds of students tackle the GMAT and grow their careers abroad.

And yes, they still find time to jam blue grass together. 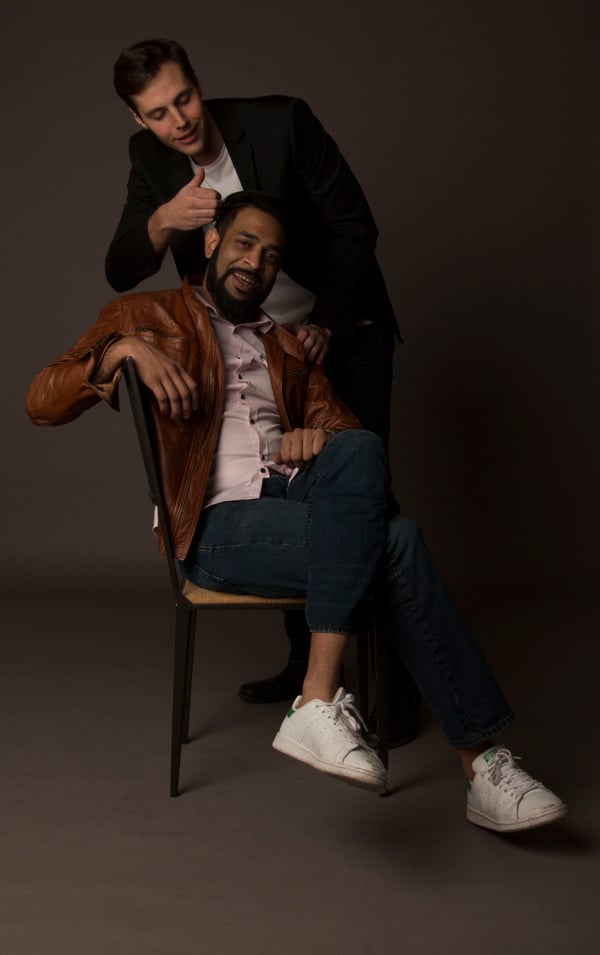 Born in the land of sugar, located in the great state of Texas, I found my true home in Buenos Aires when I first moved here in 2010. It was here where I discovered my true calling which is helping others achieve their dreams. I have a passion for learning and consider myself a lifelong student.

Creative entrepreneur based in Buenos Aires who has helped hundreds through their MBA journey. I can wear a lot of different hats and play a lot of instruments.   I can help you get into your dream MBA program and then get that job you've always wanted. I can then come visit you at your mountain or beach house. No?

Born and raised outside of Washington DC, small business entrepreneur, and master of the Argentine Parilla (Barbecue), I pride myself as a serial "make-things-happener " for myself and our students!

Born in Buenos Aires but raised in the world... I lived in Mexico, New Zealand, Scotland, Spain, and am now settled in a small beach town in Uruguay. With a Design background, I have always been passionate about communication and education. My studies as an Othological Coach help me develop my new position as HR Manager. I love connecting with people and having new adventures. I can spend hours dancing surrounded by friends and dogs!

Born and bred in Bristol, UK. I have been living outside of the UK for 10 years, I still have a strong accent, how!?! I started my trip in Indonesia, working as a Dive Master and now in Argentina where I'm always on the search for the best pizza restaurant! I love meeting and connecting with new people, which is one of the main reasons why I love what I do here at Merchant!

Greek born and raised, I spent a fair bit of time in the UK working on the applications of psychoanalysis in Business and Learning before closing shop and moving down South for new adventures. I love classic rock, a good Malbec and long-distance running - preferably, in that order.
Born & Raised in the US and living in Buenos Aires for the last 14 years, I'd like to consider myself an "American" in the truest sense of the word. As the "Integrator" at Merchant I focus on continuously improving the synergy between departments, as well as the never-ending improvement of the client & employee experience. My main interests outside of work revolve around music (I'm also a DJ), sports, social causes & bringing people together for a good time.
From the Far West in the outskirts of Buenos Aires, land of poets, trains and rock and roll, I live among homemade meals and nights of playing strategy games, whenever my cat allows it. As a writer and translator, I will help you find the words that bring that MBA star out of you.
Born and raised in the outskirts of Buenos Aires to a japanese-paraguayan family (go figure!) I love words, stories and looking up things online. Addicted to coffee and mate. Glad to help with whatever I can!
Born and raised in La Plata, now based in a small beach town in Uruguay. I love talking and connecting with new people. I'm always interested in the stories people tell! My happiest self is near the ocean and surrounded by friends (and animals, too!)

I’m a math professor born and raised in Buenos Aires. I got my teaching degree in 2018 and nothing keeps me apart from the classroom ever since. I’m a big fan of logic games and everything that involves solving problems. I’m always searching for new challenges!

Born and raised in Zarate, a small town close to Buenos Aires, I am an English translator and teacher with about 15 years of experience in language related jobs. I believe I am a determined, focused, and hard-working person who enjoys doing what I love. A lover of road trips, I am always “on the road”, looking for new places to love and enjoy. I love good reading, researching history and culture related topics, cooking and trying new foods. My idea of fun times will usually entail spending time with my friends and family and sharing a glass of good wine and some homemade tasty food!
Born and raised in Mendoza, I am a professor of English Language and Linguistics and also a researcher who is passionate about communication and the power of language. I consider myself a hard-working and determined person, and hard work and determination are qualities that I try to instill in my students. I love traveling, trying new food and learning about other cultures. In my free time, I like spending time with my family and I enjoy going out with friends as well. I never say no to a glass of good wine and a powerful movie!
Born and raised in Caracas, Venezuela. Moved to Buenos Aires in 2012. Geek since childhood I enjoy gaming and outdoors activities. With a diverse background I consider myself a Jack of All Trades who's always done for an adventure.
Born and raised in Buenos Aires, you will never find me without my “mate”. Even though I love numbers, if you give me 2 days I will finish a full book of 2000 pages. During the past 7 years, I had the chance to meet people from all over the world and get to know all their experiences. I'm really thankful to Merchant for giving me the opportunity to develop my skills further and get to know more people!

Born and raised in the southern suburbs of Buenos Aires, I am a long-time vegetarian who doesn't like to eat vegetables at all! I love pretty much every sport (E sports excluded) and competitions. My true passion in life is fixing things, either abstract or concrete ones, even more if it requires alternative thinking or resources. That's why I'm known as "The Wolf"!

Born and raised in Buenos Aires, I am a systems analyst who is obsessed with technology. In my other life, I am a photographer who loves dogs and travel. With a background in law and finance, you will find me working my 'assets' off and solving problems you didn’t know you had... that is, until my Italian roots start to show, and then you will find me drinking wine and talking loud.